Click any green or red icon to open a scripture link. 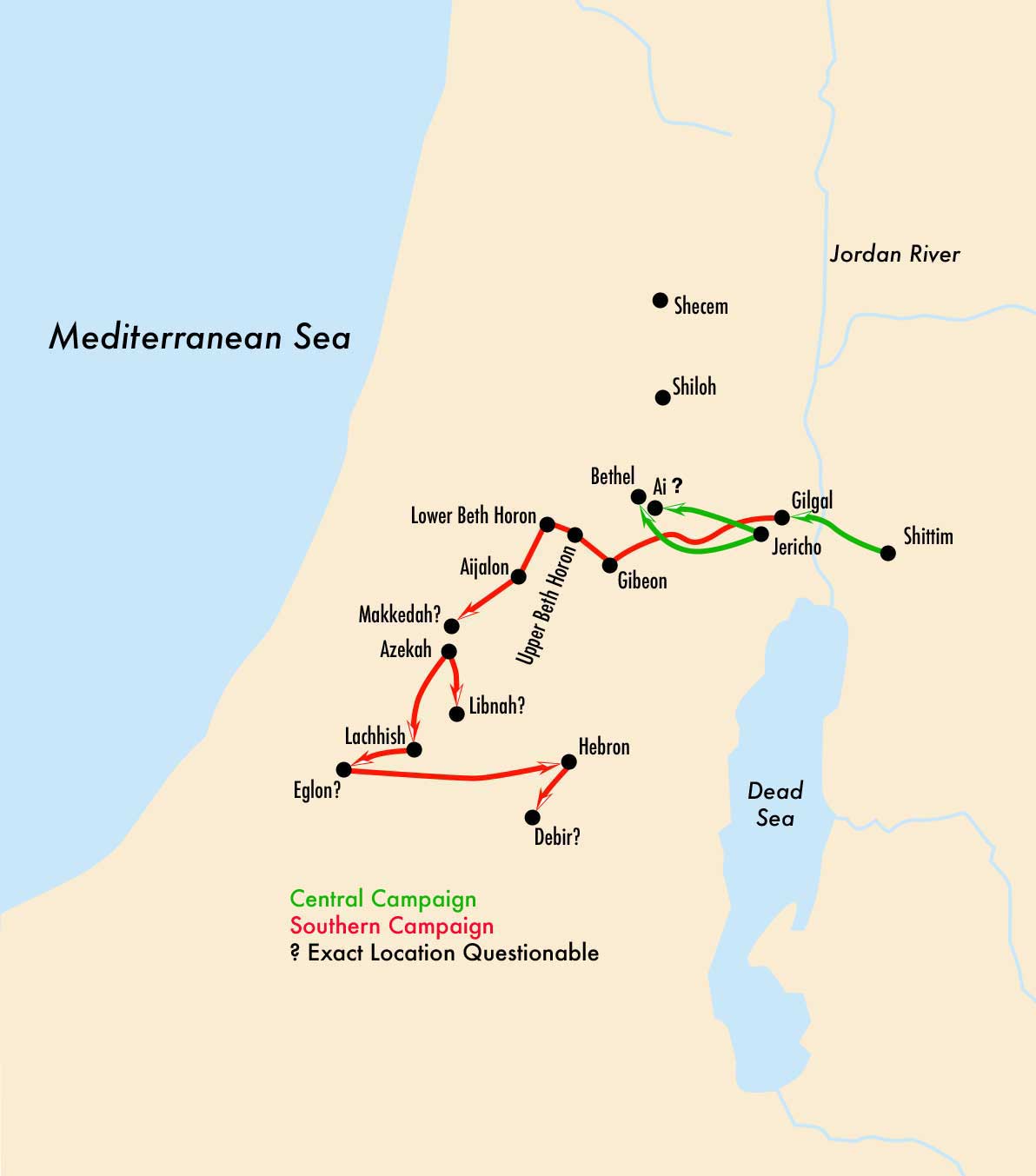 Conquest of Canaan
The Gibeon Deception
×

The Conquest of Canaan – Southern & Central

The Israelite conquest of the ‘promised land’ of Canaan took at least two years. The first year was occupied with a campaign to destroy the southern cities of Canaan. The Israelites moved west from their camp on the Plains of Moab, crossed the River Jordan and attacked Jericho in April in c.1406BC. After seven days of noisy marching round the city (to intimidate the inhabitants and perhaps to distract them from the Israeli tunnellers who were secretly undermining the city walls) Jericho fell and was burnt to the ground.

The next target was the city of Ai. The first approach, a pitched battle outside the city, was a disaster, but a second, more subtle, approach succeeded in luring the defenders away from the city – which was then successfully destroyed in a commando raid.

After making a treaty with the people of Gibeon, the Israelites then confronted the five Amorite kings of Jerusalem, Hebron, Jarmuth, Lachish and Eglon when these Canaanite kings beseiged Gibeon. The five kings were killed in a surprise attack, and the city of Makkedah was captured. Joshua then took advantage of the situation to destroy the southern cities of Libnah, Lachish, Eglon, Hebron and Debir – though the well-fortified city of Jerusalem remained an independent Canaanite enclave until it was captured by King David in 1004 BC.

Gezer also appears to have maintained its independence as a Canaanite stronghold, and was only handed over to the Israelites by Pharoah Haremheb of Egypt when King Solomon married his daughter in c.970BC.

By the end of c.1406BC, the Israelites had conquered much of the southern region from Kadesh Barnea in the Negev Desert to Gaza on the Mediterranean coast, and from Goshen on the southern border with Egypt to Gibeon in the north. 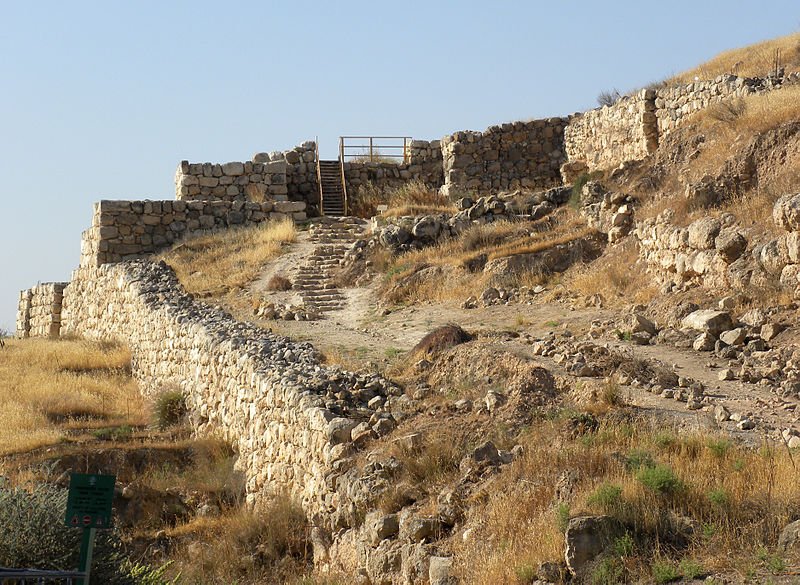 Gibeon was an ancient settlement 5½ miles / 9 km north west of Jerusalem and only 1 mile / 1.5 km north of the hilltop settlement of Mizpah. It was one of the cities of Canaan conquered by the Israelites shortly after the destruction of Jericho in c.1406 BC (see Joshua 9:1-27).

Fearing that the Israelites would reduce their city to rubble – as Joshua had done at Jericho and Ai – the Hivite people of Gibeon approached the Israelite camp at Gilgal and asked for a peace treaty, claiming to be from a distant city. They deliberately dressed themselves in travel-worn clothes and carried mouldy provisions and leaking wineskins to give the impression of having travelled a great distance. The Israelites were completely taken in, and swore an oath of friendship which they were unable to break when, shortly afterwards, they discovered that the Gibeonites were really close neighbours.

As a punishment, the people of Gibeon were taken into slavery as menial servants, cutting firewood and collecting water from the deep wells. Much later, the famine that afflicted Israel towards the end of King David’s reign was blamed on King Saul’s violation of this treaty when he attempted to annihilate the Gibeonites (see 2 Samuel 21:1-6).

After it was conquered by the Israelites, Gibeon was beseiged by the King of Jerusalem and four other Amorite kings of Canaan. Joshua marched overnight from Gilgal, and defeated the Amorites in a surprise attack.  The sun was said to stand still all day on this memorable occasion (see Joshua 10:12-14). Gibeon then became one of the cities of the tribe of Benjamin allocated to the Levites who performed a priestly function for the people of Israel (see Joshua 21:17).

After David became King of Judah in 1011 BC, his soldiers, under the command of Joab, defeated the forces of Saul’s son Ishbosheth (who had been proclaimed King of Israel by Saul’s general, Abner) at the Pool of Gibeon (see 2 Samuel 2:8-17). It was here, also, that David defeated the Philistines (see 2 Samuel 5:25).

Modern-day visitors to the pictuesque Palestinian village of Al-Jib can explore the hilltop site of ancient Gibeon, and look south across the Valley of Gibeon to the mosque and minaret marking the traditional site of Samuel’s Tomb at Mizpah. Still visible today is a huge well – the Pool of Gibeon - nearly 39 feet / 12 m in diameter and over 35 feet / 10 m deep. The well has a spiral staircase cut into the walls, which continues downwards to a tunnel leading to an underground reservoir 78 feet / 24 m below the city. A later tunnel, giving access to the underground water cistern from the base of the hill, is still in use today. 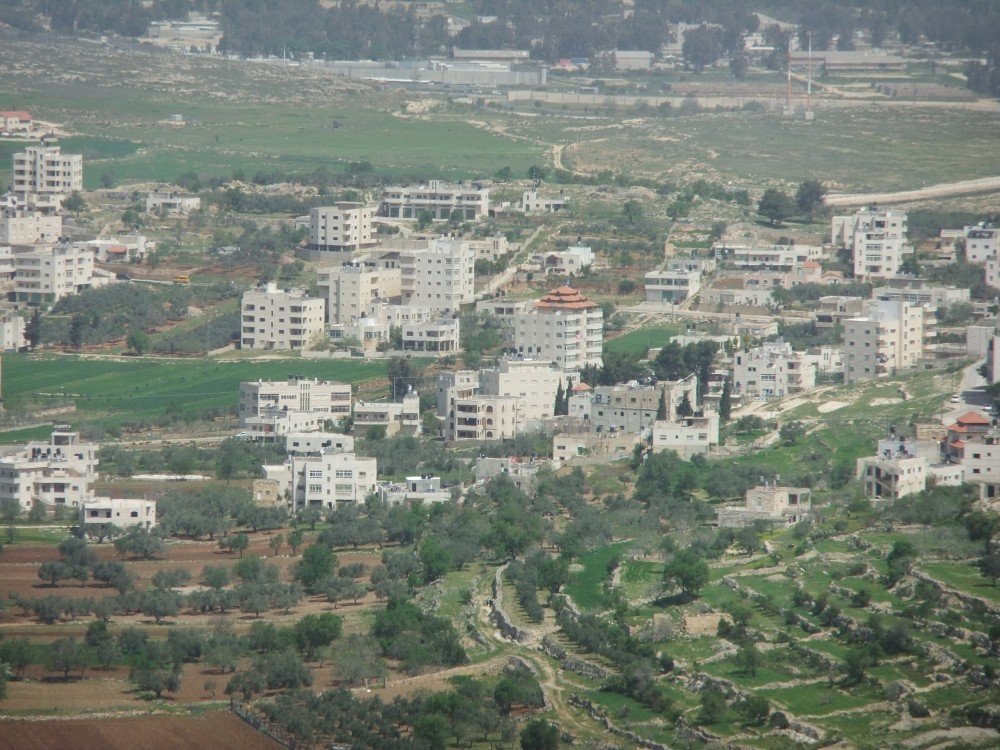 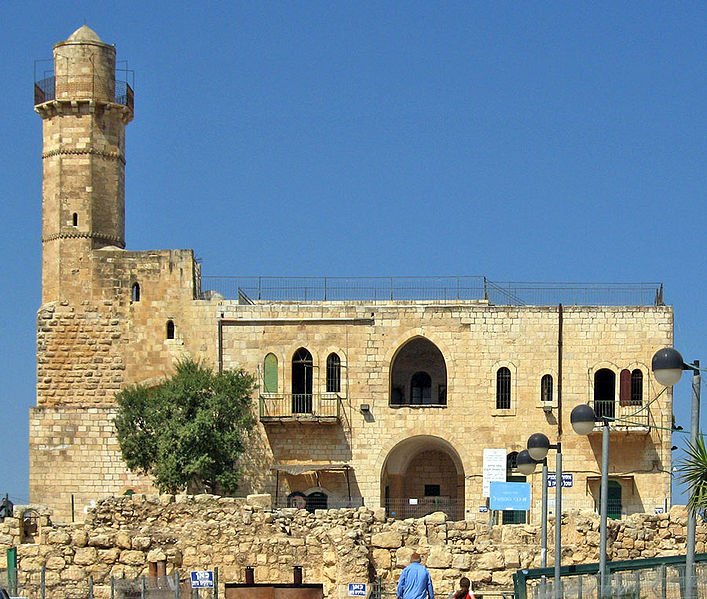