Click a numbered pulsing icon for the event summary. 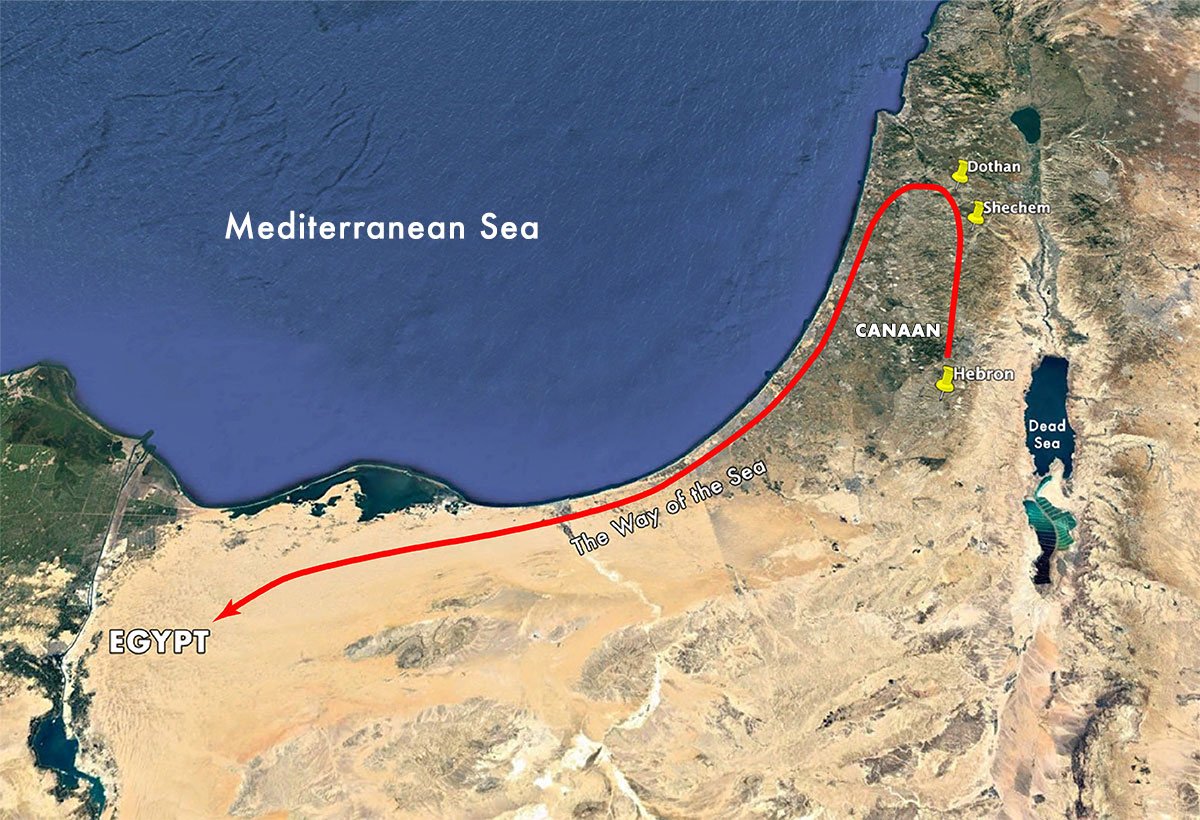 Jacob continues to live in Canaan, at Hebron.

Jacob gives his favorite son Joseph an expensive multi-colored coat. This makes his brothers very jealous. Joseph dreams about his brothers’ sheaves of wheat bowing down to his sheaf, and when he tells his brothers, it fuels their jealousy. When he tells them about eleven stars bowing down before him, the eleven brothers are furious.

Joseph’s brothers take the family’s flocks to graze in the less arid hill country near Shechem.

Joseph, now aged seventeen, arrives at Shechem but the brothers have left.

He finds them grazing the flocks on the fertile pastures near Dothan – on the plain between the hills of Samaria and the Mount Carmel range.

The brothers plot their revenge and throw Joseph into a dry well.

The brothers see a group of Ishmaelite traders travelling from Gilead to Egypt. Their camels are loaded with spices and resins (‘Balm of Gilead’). Reuben – the eldest – had persuaded the brothers not to kill Joseph; so they sell him to the Ishmaelites as a slave.

Joseph is ultimately sold on to some Midianite merchants and taken to Egypt (along The Way of the Sea).

The brothers dip Joseph’s coat in blood, then trick Jacob into believing that Joseph has been killed by a wild animal.

On reaching Egypt in c.1683BC, Joseph is sold by the Midianite traders to Potiphar, captain of the Pharaoh’s palace guard.

37 Jacob lived in the land where his father had stayed, the land of Canaan.

Joseph, a young man of seventeen, was tending the flocks with his brothers, the sons of Bilhah and the sons of Zilpah, his father’s wives, and he brought their father a bad report about them.

3 Now Israel loved Joseph more than any of his other sons, because he had been born to him in his old age; and he made an ornate robe for him. 4 When his brothers saw that their father loved him more than any of them, they hated him and could not speak a kind word to him.

5 Joseph had a dream, and when he told it to his brothers, they hated him all the more. 6 He said to them, “Listen to this dream I had: 7 We were binding sheaves of grain out in the field when suddenly my sheaf rose and stood upright, while your sheaves gathered around mine and bowed down to it.”

8 His brothers said to him, “Do you intend to reign over us? Will you actually rule us?” And they hated him all the more because of his dream and what he had said.

10 When he told his father as well as his brothers, his father rebuked him and said, “What is this dream you had? Will your mother and I and your brothers actually come and bow down to the ground before you?” 11 His brothers were jealous of him, but his father kept the matter in mind.

Joseph Sold by His Brothers

14 So he said to him, “Go and see if all is well with your brothers and with the flocks, and bring word back to me.” Then he sent him off from the Valley of Hebron.

When Joseph arrived at Shechem, 15 a man found him wandering around in the fields and asked him, “What are you looking for?”

16 He replied, “I’m looking for my brothers. Can you tell me where they are grazing their flocks?”

So Joseph went after his brothers and found them near Dothan. 18 But they saw him in the distance, and before he reached them, they plotted to kill him.

19 “Here comes that dreamer!” they said to each other. 20 “Come now, let’s kill him and throw him into one of these cisterns and say that a ferocious animal devoured him. Then we’ll see what comes of his dreams.”

23 So when Joseph came to his brothers, they stripped him of his robe—the ornate robe he was wearing— 24 and they took him and threw him into the cistern. The cistern was empty; there was no water in it.

25 As they sat down to eat their meal, they looked up and saw a caravan of Ishmaelites coming from Gilead. Their camels were loaded with spices, balm and myrrh, and they were on their way to take them down to Egypt.

26 Judah said to his brothers, “What will we gain if we kill our brother and cover up his blood? 27 Come, let’s sell him to the Ishmaelites and not lay our hands on him; after all, he is our brother, our own flesh and blood.” His brothers agreed.

28 So when the Midianite merchants came by, his brothers pulled Joseph up out of the cistern and sold him for twenty shekels of silver to the Ishmaelites, who took him to Egypt.

29 When Reuben returned to the cistern and saw that Joseph was not there, he tore his clothes. 30 He went back to his brothers and said, “The boy isn’t there! Where can I turn now?”

31 Then they got Joseph’s robe, slaughtered a goat and dipped the robe in the blood. 32 They took the ornate robe back to their father and said, “We found this. Examine it to see whether it is your son’s robe.”

33 He recognized it and said, “It is my son’s robe! Some ferocious animal has devoured him. Joseph has surely been torn to pieces.”

34 Then Jacob tore his clothes, put on sackcloth and mourned for his son many days. 35 All his sons and daughters came to comfort him, but he refused to be comforted. “No,” he said, “I will continue to mourn until I join my son in the grave.” So his father wept for him.

36 Meanwhile, the Midianites sold Joseph in Egypt to Potiphar, one of Pharaoh’s officials, the captain of the guard.

A city in the south end of the valley of Eshcol, about midway between Jerusalem and Beersheba, from which it is distant about 20 miles in a straight line. It was built "seven years before Zoan in Egypt" ( Genesis 13:18; Numbers 13:22 ). It still exists under the same name and is one of the most ancient cities in the world. Its earlier name was Kirjath-arba ( Genesis 23:2; Joshua 14:15; 15:3 ). But "Hebron would appear to have been the original name of the city, and it was not till after Abraham's stay there that it received the name Kirjath-arba, who [i.e., Arba] was not the founder but the conqueror of the city, having led thither the tribe of the Anakim, to which he belonged. It retained this name till it came into the possession of Caleb when the Israelites restored the original name Hebron" (Keil, Com.).

The name of this city does not occur in any of the prophets or in the New Testament. It is found about forty times in the Old. It was the favorite home of Abraham. Here he pitched his tent under the oaks of Mamre, by which name it came afterward to be known; and here Sarah died, and was buried in the cave of Machpelah ( Genesis 23:17-20 ), which he bought from Ephron the Hittite. From this place, the patriarch departed for Egypt by way of Beersheba ( 37:14; 46:1 ). It was taken by Joshua and given to Caleb ( Joshua 10:36 Joshua 10:37; 12:10; 14:13 ). It became a Levitical city and a city of refuge ( 20:7; 21:11 ). When David became king of Judah this was his royal residence, and he resided here for seven and a half years ( 2 Samuel 5:5 ), and here he was anointed as king over all Israel ( 2 Samuel 2:1-4 2 Samuel 2:11; 1 Kings 2:11 ). It became the residence also of the rebellious Absalom ( 2 Samuel 15:10 ), who probably expected to find his chief support in the tribe of Judah, now called el-Khulil.In one part of the modern city is a great mosque, which is built over the grave of Machpelah.

One of the largest oaks in Palestine is found in the valley of Eshcol, about 3 miles north of the town. It is supposed by some to be the tree under which Abraham pitched his tent, and is called "Abraham's oak."

The site of Shechem lies within modern-day Nablus (the largest city in Samaria founded by the Roman Emperor Titus in 72AD). The city is located on the only east-west pass through the Central Highlands, at the head of the Wadi Farah leading down to the Jordan crossing at Adam (Damia Bridge).

Shechem was an important Canaanite religious center. Abram built an altar there to commemorate his meeting with God (see Genesis 12:6) while, later, his grandson Jacob also built an altar here, and buried his wife Rachel’s household gods under the sacred oak tree (see Genesis 35:1-4).  Shechem continued to be an important religious centre after the conquest of Canaan under Joshua. At the end of the campaign, Joshua addressed all the people at Shechem and urged them to be faithful to the LORD their God (see Joshua 24:1). He renewed the covenant with God and set up a large sacred stone at Shechem to act as a witness (see Joshua 24:25-27).

In 1404 BC, Joshua died at Shechem, and the mummified body of Abraham’s great-grandson Joseph (which had been brought from Egypt) was laid to rest at Shechem (where he had lived as a young man – see Joshua 24:32 & Genesis 37:12). When the people of Israel turned to Baal after the death of Gideon in c.1170 BC, they worshipped at the great fortress-temple of Baal-berith here at Shechem (see Judges 8:33).

At Tel Balata, to the east of the centre of Nablus, modern visitors can explore the remnants of the Canaanite city of Shechem. The ruins include two gateways, extensive enclosure walls and revetments, and remains of the temple of Baal-berith – known as Migdol Shechem (the 'Tower of Shechem') - which was burnt down by Abimelech in c.1168 BC, with the inhabitants of Shechem inside - see Judges 9:46-49).

Half a mile / 1 km north east of Tel Balata is the traditional site of the Tomb of Joseph, covered by a small white-domed Ottoman building. Half a mile / 1 km south of Joseph’s Tomb is the site of Jacob’s Well (see John 4:6), now enclosed within a Greek Orthodox Monastery.