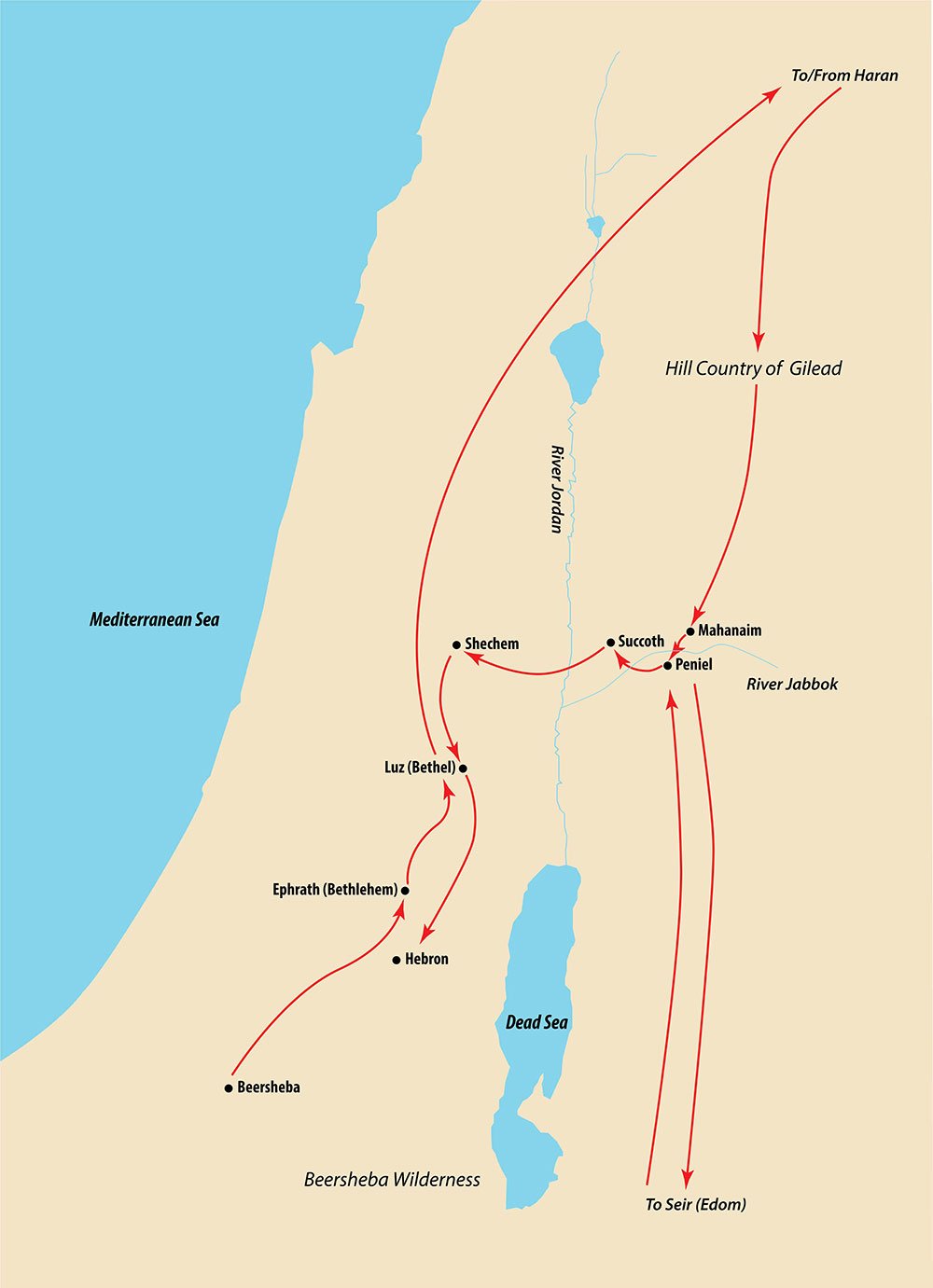 Jacob leaves Beersheba and flees to Haran in c.1703BC. Travelling north, he rests for the night at Luz (Bethel) and has an amazing dream.

Laban’s sons are furious with their cousin Jacob, so Jacob flees secretly from Haran. He puts his wives and children on camels and crosses ‘the river’ (the River Euphrates) then heads for the hill country of Gilead.

Jacob sets off from Mizpah in the hill country of Gilead and is met en route by angels (messengers) sent by God. Jacob exclaims, “This is the camp of God” and calls the place Mahanaim.

Jacob remembers that, when he left Canaan twenty years earlier, his brother Esau had threatened to kill him. So he sends messengers to Esau in the land of Seir (Edom), and prepares a gift of goats, sheep and camels to pacify him.

Jacob crosses the ford of the River Jabbok (the modern River Zarqa) at Mahanaim under cover of darkness.
Jacob wrestles all night alone with God, seeking his blessing. God gives Jacob the name ‘Israel’, meaning ‘He struggles with God’. Jacob calls the place Peniel (‘face of God’) as he has seen God face to face.

Jacob meets Esau by the River Jabbok. Jacob is scared because, when he was younger, he cheated Esau out of his birthright (see Genesis 27:1-40). But Esau has long since forgiven Jacob and is delighted to see him. He is persuaded to accept Jacob’s gifts.

Esau returns to Seir (Edom), but Jacob follows the track downstream and erects shelters for his cattle at Succoth (meaning ‘shelters’) on the floor of the Jordan Valley.

Jacob arrives at Shechem in c.1691BC (see Genesis 12:6-7) where he buys some land for a tomb from the sons of Hamor and sets up an altar called El Elohe Yisrael (Hebrew, meaning ‘God, the God of Israel’ or ‘God, the God of Jacob’). Jacob’s son Joseph is later buried in this tomb when his body is brought back from Egypt in c.1405BC (see Joshua 24:32). Joseph’s tomb can still be seen today in Shechem (modern-day Nablus)

God sends Jacob to Bethel (the site of Jacob's dream - see Genesis 28:17). Before leaving Shechem, Jacob buries all the foreign gods that his wives brought from Haran under an oak tree. He arrives at Bethel (Luz) and builds an altar to God called El Bethel(‘God of Bethel’).

Jacob arrives back at his father Isaac’s home at Hebron. Shortly after, Isaac dies, and Jacob and Esau bury their father in the family tomb at Machpelah Cave.

(1) A town near the place where Abraham halted and offered sacrifice on his way south from Shechem.

It lay West of Ai (Genesis 12:8). It is named as on the northern border of Benjamin (the southern of Ephraim, Joshua 16:2), at the top of the ascent from the Jordan valley by way of Ai (Joshua 18:13). It lay South of Shiloh (Judges 21:19). Eusebius, Onomasticon places it 12 Roman miles from Jerusalem, on the road to Neapolis. It is represented by the modern Beitin, a village of some 400 inhabitants, which stands on a knoll East of the road to Nablus. There are four springs which yield supplies of good water. In ancient times these were supplemented by a reservoir hewn in the rock South of the town. The surrounding country is bleak and barren, the hills being marked by a succession of stony terraces, which may have suggested the form of the ladder in Jacob's famous dream.

The town was originally called Luz (Genesis 28:19, etc.). When Jacob came hither on his way to Paddan-aram we are told that he lighted upon "the place" (Genesis 28:11. Hebrew). The Hebrew maqom, like the cognate Arabic maqam, denotes a sacred place or sanctuary. The maqom was doubtless that at which Abraham had sacrificed, East of the town. In the morning Jacob set up "for a pillar" the stone which had served as his pillow (Genesis 28:18; see PILLAR, matstsebhah), poured oil upon it and called the name of the place Bethel, "house of God"; that is, of God whose epiphany was for him associated with the pillar. This spot became a center of great interest, lending growing importance to the town. In process of time the name Luz disappeared, giving place to that of the adjoining sanctuary, town and sanctuary being identified. Jacob revisited the place on his return from Paddan-aram; here Deborah, Rebekah's nurse, died and was buried under "the oak" (Genesis 35:6). Probably on rising ground East of Bethel Abraham and Lot stood to view the uninviting highlands and the rich lands of the Jordan valley (Genesis 13:9).

Bethel was a royal city of the Canaanites (Joshua 12:16). It appears to have been captured by Joshua (8:7), and it was allotted to Benjamin (Joshua 18:22). In Judges 1:22 it is represented as held by Canaanites, from whom the house of Joseph took it by treachery (compare 1 Chronicles 7:28). Hither the ark was brought from Gilgal (Judges 2:1, Septuagint). Israel came to Bethel to consult the Divine oracle (Judges 20:18), and it became an important center of worship (1 Samuel 10:3). The home of the prophetess Deborah was not far off (Judges 4:5). Samuel visited Bethel on circuit, judging Israel (1 Samuel 7:16).

With the disruption of the kingdom came Bethel's greatest period of splendor and significance. To counteract the influence of Jerusalem as the national religious center Jeroboam embarked on the policy which won for him the unenviable reputation of having "made Israel to sin." Here he erected a temple, set up an image, the golden calf, and established an imposing ritual. It became the royal sanctuary and the religious center of his kingdom (1 Kings 12:29; Amos 7:13). He placed in Bethel the priests of the high places which he had made (1 Kings 12:32). To Bethel came the man of God from Judah who pronounced doom against Jeroboam (1 Kings 13), and who, having been seduced from duty by an aged prophet in Bethel, was slain by a lion. According to the prophets Amos and Hosea the splendid idolatries of Bethel were accompanied by terrible moral and religious degradation. Against the place they launched the most scathing denunciations, declaring the vengeance such things must entail (Amos 3:14; 4:4; 5:11 m; Amos 9:1; Hosea 4:15; 5:8; 10:5,8,15). With the latter the name Bethel gives place in mockery to Beth-aven. Bethel shared in the downfall of Samaria wrought by the Assyrians; and according to an old tradition, Shalmaneser possessed himself of the golden calf (compare Jeremiah 48:13). The priest, sent by the Assyrians to teach the people whom they had settled in the land how to serve Yahweh, dwelt in Bethel (2 Kings 17:28). King Josiah completed the demolition of the sanctuary at Bethel, destroying all the instruments of idolatry, and harr ying the tombs of the idolaters. The monument of the man of God from Judah he allowed to stand (2 Kings 23:4,25). The men of Bethel were among those who returned from Babylon with Zerubbabel (Ezra 2:28; Nehemiah 7:32), and it is mentioned as reoccupied by the Benjamites (Nehemiah 11:31). Zechariah (Zechariah 7:2) records the sending of certain men from Jerusalem in the 4th year of King Darius to inquire regarding particular religious practices. Bethel was one of the towns fortified by Bacchides in the time of the Maccabees (1 Macc 9:50; Ant, XIII, i, 3). It is named again as a small town which, along with Ephraim, was taken by Vespasian as he approached Jerusalem (BJ, IV, ix, 9).

(2) A city in Judah which in 1 Samuel 30:27 is called Bethel; in Joshua 19:4 Bethul; and in 1 Chronicles 4:30 Bethuel. The site has not been identified. In Joshua 15:30 Septuagint gives Baithel in Judah, where the Hebrew has Kecil--probably a scribal error.

Haran is one of the oldest cities on earth that is still inhabited today. Founded by settlers migrating west from Mesopotamia in the 18th century BC, the city was at its peak during the Hittite Empire, based on Central Anatolia in the 12th century BC. It was already centuries old when the Hittites fought Ramesses II of Egypt at the Battle of Kadesh in 939 BC.

Modern travellers to Harran (Haran), near Altinbaşak in eastern Turkey, can sense the antiquity of the settlement when they encounter its decaying walls, the ruins of the ancient 11th century citadel, and the remains of the Old Mosque. Haran is famous for its unique beehive-shaped mudbrick houses that originated in the 3rd century BC and which have been rebuilt in the same style many times during the intervening centuries. 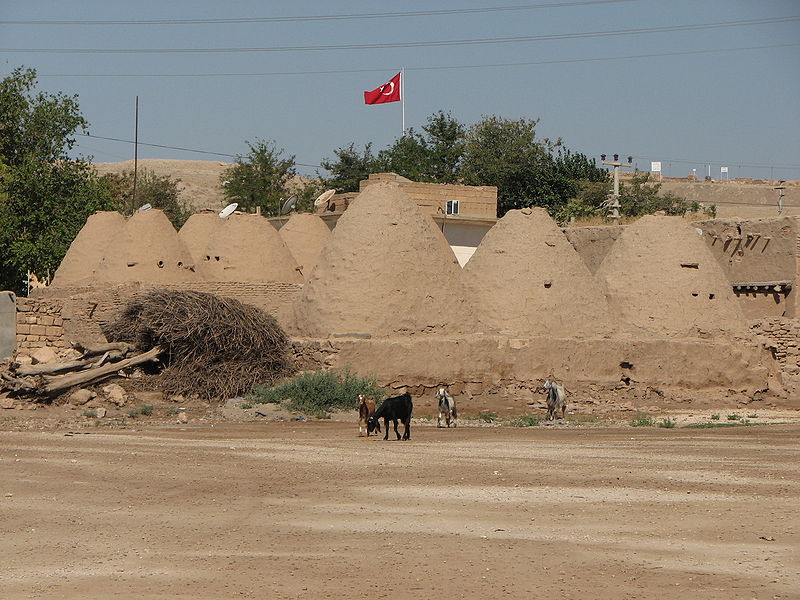