The Vale of Jezreel 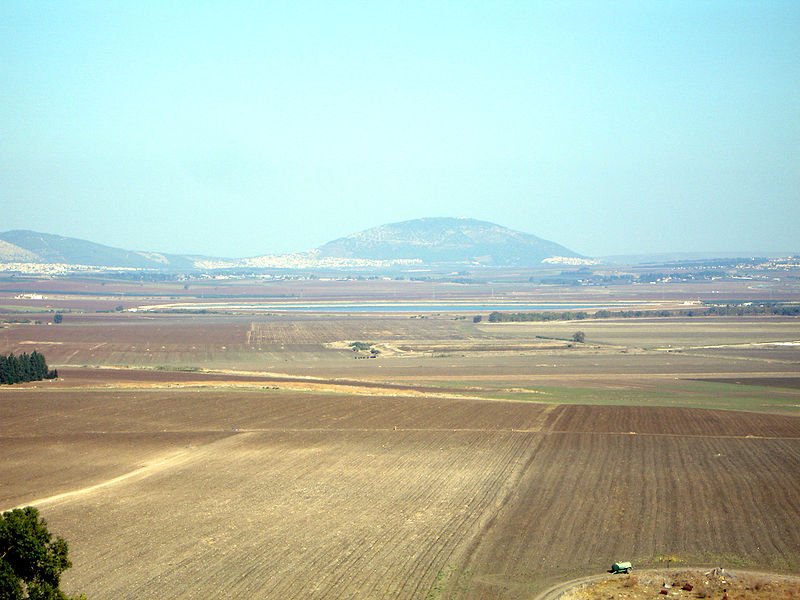 The Vale of Jezreel (the ‘Valley of Israel’ – also known as the Plain of Esdraelon) was an important lowland corridor running from south east to north west, linking the Jordan Valley near Beth Sheanto the coastal plain north of Mount Carmel (near the modern city of Haifa). At the coastal end, this lowland routeway joined up with the Via Maris – the ‘Way of the Sea’ which ran along the coastal plain linking the ancient civilizations of Egypt and Mesopotamia. Near its junction with the coastal plain, the Vale of Jezreel was guarded and controlled by the well-defended fortress at Megiddo – Biblical ‘Armageddon’.

Because of its strategic position, the Jezreel Valley was the site of many battles. The earliest recorded confrontation pre-dates the Israelite invasion of Canaan. During the 15th century BC, the Egyptian pharaoh Thutmose III defeated a Canaanite coalition under the kings of Kedesh and Megiddo at the Battle of Megiddo, fought in the Valley of Jezreel.

Over two hundred years later, in c.1208BC, Midianites and Amalekites crossed the River Jordan and headed north west along the Vale of Jezreel to plunder and ravage the lands along the fertile coastal plain. Calling together men from the tribes of Manasseh, Asher, Zebulun and Naphtali, Gideon defeated the Midianites on the valley floor just north of Mount Gilboa (see Judges 6:33-35 & 7:1-25). Gideon, himself, was born in the Vale of Jezreel at Ophrah – usually identified as the modern-day city of Afula (see Judges 6:11 & 24).

Later, in 1011 BC, Saul – the first king of Israel – was killed by the Philistines at the Battle of Gilboa, overlooking the Vale of Jezreel, and his corpse was displayed on the walls of Beth Shean (see 1 Samuel 28:4, 29:1 & 31:1-10). Four hundred years later, in 610BC, King Josiah of Judah was killed at Megiddo by Pharoah Neco of Egypt, when Josiah tried to prevent the Egyptian king from crossing the Jezreel Valley en route to Assyria (see 2 Kings 23:29).

6
33 Now all the Midianites, Amalekites and other eastern peoples joined forces and crossed over the Jordan and camped in the Valley of Jezreel. 34 Then the Spirit of the Lord came on Gideon, and he blew a trumpet, summoning the Abiezrites to follow him. 35 He sent messengers throughout Manasseh, calling them to arms, and also into Asher, Zebulun and Naphtali, so that they too went up to meet them.

7
1 Early in the morning, Jerub-Baal (that is, Gideon) and all his men camped at the spring of Harod. The camp of Midian was north of them in the valley near the hill of Moreh. Now the camp of Midian lay below him in the valley.
19 Gideon and the hundred men with him reached the edge of the camp at the beginning of the middle watch, just after they had changed the guard. They blew their trumpets and broke the jars that were in their hands. 20 The three companies blew the trumpets and smashed the jars. Grasping the torches in their left hands and holding in their right hands the trumpets they were to blow, they shouted, “A sword for the Lord and for Gideon!” 21 While each man held his position around the camp, all the Midianites ran, crying out as they fled.
22 When the three hundred trumpets sounded, the Lord caused the men throughout the camp to turn on each other with their swords. The army fled to Beth Shittah toward Zererah as far as the border of Abel Meholah near Tabbath. 23 Israelites from Naphtali, Asher and all Manasseh were called out, and they pursued the Midianites. 24 Gideon sent messengers throughout the hill country of Ephraim, saying, “Come down against the Midianites and seize the waters of the Jordan ahead of them as far as Beth Barah.”
So all the men of Ephraim were called out and they seized the waters of the Jordan as far as Beth Barah.
8
4 Gideon and his three hundred men, exhausted yet keeping up the pursuit, came to the Jordan and crossed it. 5 He said to the men of Sukkoth, “Give my troops some bread; they are worn out, and I am still pursuing Zebah and Zalmunna, the kings of Midian.”
10 Now Zebah and Zalmunna were in Karkor with a force of about fifteen thousand men, all that were left of the armies of the eastern peoples; a hundred and twenty thousand swordsmen had fallen. 11 Gideon went up by the route of the nomads east of Nobah and Jogbehah and attacked the unsuspecting army. 12 Zebah and Zalmunna, the two kings of Midian, fled, but he pursued them and captured them, routing their entire army.
13 Gideon son of Joash then returned from the battle by the Pass of Heres. 14 He caught a young man of Sukkoth and questioned him, and the young man wrote down for him the names of the seventy-seven officials of Sukkoth, the elders of the town. 15 Then Gideon came and said to the men of Sukkoth, “Here are Zebah and Zalmunna, about whom you taunted me by saying, ‘Do you already have the hands of Zebah and Zalmunna in your possession? Why should we give bread to your exhausted men?’” 16 He took the elders of the town and taught the men of Sukkoth a lesson by punishing them with desert thorns and briers. 17 He also pulled down the tower of Peniel and killed the men of the town.