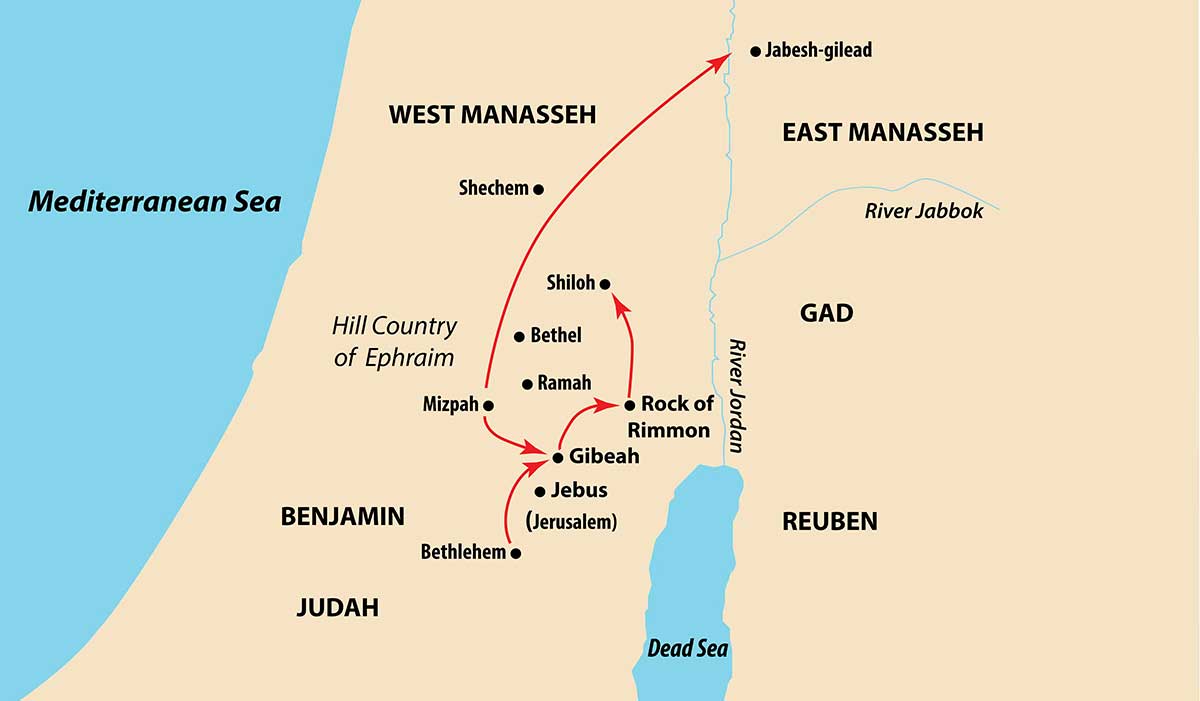 Judges 19:1-30  A Levite from the hill country of Ephraim takes a concubine from Bethlehem in Judah, but she is unfaithful and returns to her father in Bethlehem.

The Levite persuades her father to let the young woman return with him to Ephraim. They set off late in the day and not wishing to stay overnight in the Canaanite city of Jebus (Jerusalem), the Levite and his partner push on northwards towards Ramah.

As dusk falls, they decide to stay overnight with an old man in Gibeah. The men of Gibeah (who are of the tribe of Benjamin) rape and abuse the concubine and she dies on the doorstep outside the house. The news of this appalling murder spreads quickly throughout Israel.

Judges 20:1-48  The elders of the tribes of Israel assemble at Mizpah to discuss an appropriate response to this atrocity. The Benjaminites refuse to hand over the perpetrators of the crime, so the Israelites attack the Benjaminites outside Gibeah.

Judges 20:1-48  On the third day of battle, the Israelites feign a retreat and draw the Benjaminites into an ambush at Baal Tamar, west of Gibeah. The Benjaminites are defeated and Gibeah is burned to the ground. A few hundred Benjaminites escape into the desert to the Rock of Rimmon, overlooking the Jordan valley.

Judges 21:1-14  The Israelites assembled at Mizpah had previously made an oath forbidding the marriage of their daughters to a Benjaminite. The elders now discover that no one from Jabesh Gilead had attended the assembly. They send a fighting force to slaughter the adult inhabitants of Jabesh Gilead as a punishment, and they return with four hundred young women who are offered as wives to the remaining Benjaminites.

Judges 21:15-25  Those Benjaminites who have not been given a wife as part of this peace treaty are encouraged to abduct one of the young women from Shiloh during the annual religious festival, probably the Feast of Ingathering or ‘Tabernacles’ (see Exodus 23:16).

Gibeah (meaning ‘hill’) was a city in the hill country just to the north of Jerusalem. Situated alongside the main road from Bethlehem to Shechem (see Judges 19:10-15), the site of ancient Gibeah has been identified as Tel el-Ful 3 miles / 5 km north of Jerusalem, and next to the modern Israeli settlement at Pisgat Ze’ev. After the conquest of Canaan by the Israelites in c.1406 BC, Gibeah was allocated to the tribe of Benjamin (see Joshua 18:28).

Subsequently, Gibeah became the site of what might be regarded as the only ‘civil war’ in the history of Israel. The story of the Levite and his concubine (see Judges 19:1-30) may seem strange to modern ears, but in the days of the ‘Judges’, it was quite common for a man to have a ‘concubine’ as well as a wife. A concubine had the legal status of a marriage partner, but had less esteem than a wife and was treated more like a servant. When the Levite’s concubine was gang-raped and left for dead on the doorstep of his overnight host at Gibeah, the other Israelite tribes decided to bring the unrepentant men of Gibeah to account for this atrocious crime. In the ensuing Battle of Gibeah, most of the tribe of Benjamin were wiped out – which resulted in the Benjaminites subsequently being the smallest of the twelve tribes (see 1 Samuel 9:21).

Israel’s first king, Saul, came from Gibeah, and ruled from here during his brief two-year reign (see 1 Samuel 10:26 & 13:1 where the ‘Tanakh’ – the original Hebrew Bible - says “two years”). Saul set up his royal court at Gibeah, and this is where David came to play his harp to soothe the troubled monarch (see 1 Samuel 16:14-23). It was also where David was given Saul’s daughter Michal in marriage shortly after he killed the Philistine champion, Goliath of Gath (see 1 Samuel 18:27).

Saul’s royal residence at Gibeah was abandoned after David became king of the re-united Israel and Judah in c.1004 BC, but the city was subsequently re-settled. The prophet Isaiah records that the people of Gibeah fled when the Assyrian king Sennacherib attacked Jerusalem in 702 BC (see Isaiah 10:29 & 2 Kings 18:17).

The Jewish historian Josephus records that the Roman 10th legion camped at Gibeah before their final assault on Jerusalem in 70AD. More recently, King Hussein of Jordan began building a West Bank royal palace here in the 1960s – the shell of which was abandoned after Israel occupied the area during the Six-Day War of 1967 and built the modern Israeli settlement of Pisgat Ze’ev.