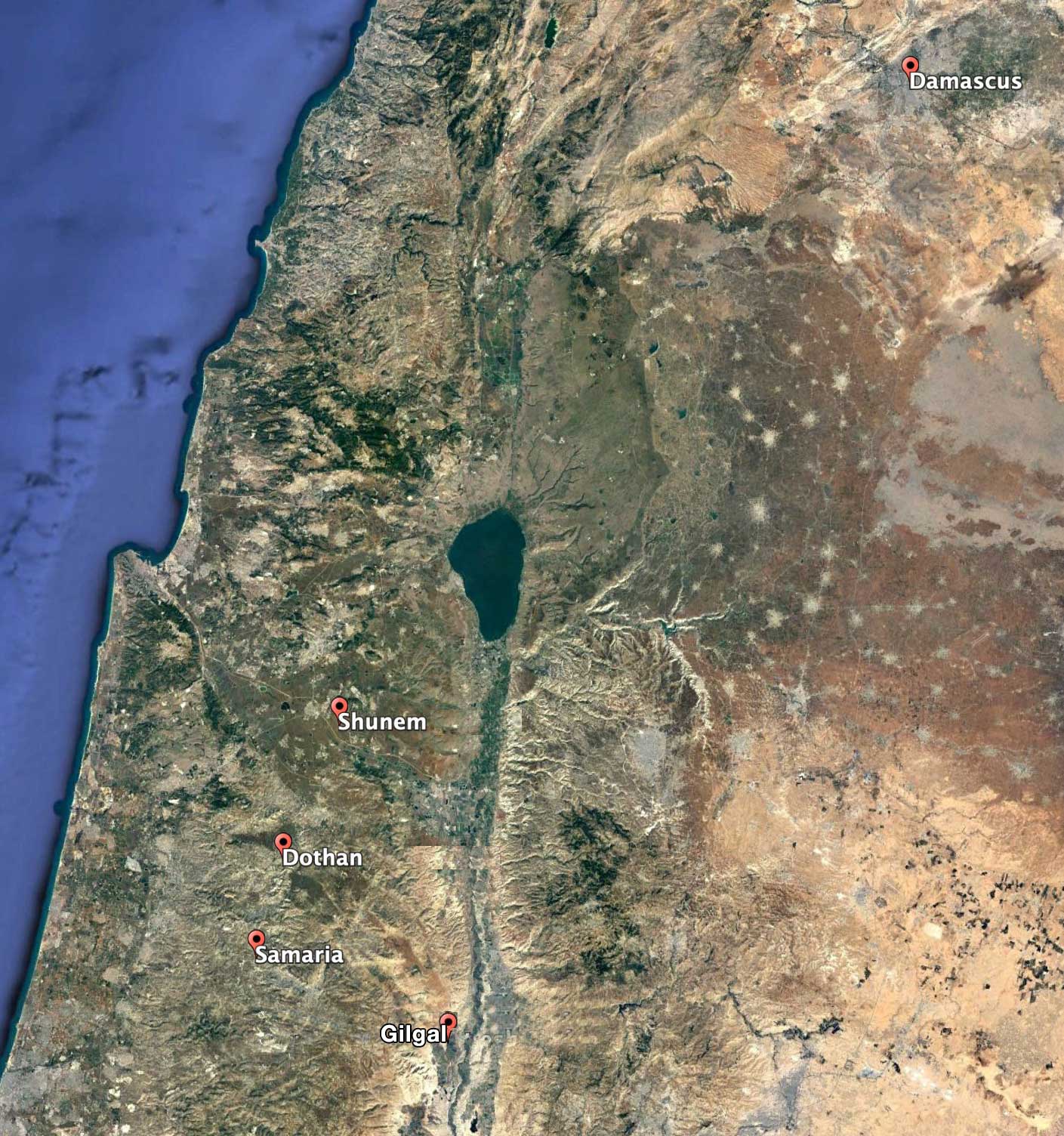 Elijah Taken Up to Heaven

At Shunem, Elisha brought a widow’s son back to life.

Elisha protected the cities of Dothan and Samaria through chariots of fire and by bringing blindness upon the Syrian army.

Elisha protected the cities of Dothan and Samaria through chariots of fire and by bringing blindness upon the Syrian army.

At Damascus, Elisha predicted that the wicked Hazael would succeed Ben-Hadad as king of Syria.

Elijah Taken Up to Heaven

2 When the Lord was about to take Elijah up to heaven in a whirlwind, Elijah and Elisha were on their way from Gilgal. 2 Elijah said to Elisha, “Stay here; the Lord has sent me to Bethel.”

But Elisha said, “As surely as the Lord lives and as you live, I will not leave you.” So they went down to Bethel.

3 The company of the prophets at Bethel came out to Elisha and asked, “Do you know that the Lord is going to take your master from you today?”

4 Then Elijah said to him, “Stay here, Elisha; the Lord has sent me to Jericho.”

And he replied, “As surely as the Lord lives and as you live, I will not leave you.” So they went to Jericho.

5 The company of the prophets at Jericho went up to Elisha and asked him, “Do you know that the Lord is going to take your master from you today?”

6 Then Elijah said to him, “Stay here; the Lord has sent me to the Jordan.”

And he replied, “As surely as the Lord lives and as you live, I will not leave you.” So the two of them walked on.

7 Fifty men from the company of the prophets went and stood at a distance, facing the place where Elijah and Elisha had stopped at the Jordan. 8 Elijah took his cloak, rolled it up and struck the water with it. The water divided to the right and to the left, and the two of them crossed over on dry ground.

9 When they had crossed, Elijah said to Elisha, “Tell me, what can I do for you before I am taken from you?”

“Let me inherit a double portion of your spirit,” Elisha replied.

10 “You have asked a difficult thing,” Elijah said, “yet if you see me when I am taken from you, it will be yours—otherwise, it will not.”

11 As they were walking along and talking together, suddenly a chariot of fire and horses of fire appeared and separated the two of them, and Elijah went up to heaven in a whirlwind. 12 Elisha saw this and cried out, “My father! My father! The chariots and horsemen of Israel!” And Elisha saw him no more. Then he took hold of his garment and tore it in two.

The Shunammite’s Son Restored to Life

8 One day Elisha went to Shunem. And a well-to-do woman was there, who urged him to stay for a meal. So whenever he came by, he stopped there to eat. 9 She said to her husband, “I know that this man who often comes our way is a holy man of God. 10 Let’s make a small room on the roof and put in it a bed and a table, a chair and a lamp for him. Then he can stay there whenever he comes to us.”

11 One day when Elisha came, he went up to his room and lay down there. 12 He said to his servant Gehazi, “Call the Shunammite.” So he called her, and she stood before him. 13 Elisha said to him, “Tell her, ‘You have gone to all this trouble for us. Now what can be done for you? Can we speak on your behalf to the king or the commander of the army?’”

She replied, “I have a home among my own people.”

Gehazi said, “She has no son, and her husband is old.”

15 Then Elisha said, “Call her.” So he called her, and she stood in the doorway. 16 “About this time next year,” Elisha said, “you will hold a son in your arms.”

“No, my lord!” she objected. “Please, man of God, don’t mislead your servant!”

17 But the woman became pregnant, and the next year about that same time she gave birth to a son, just as Elisha had told her.

His father told a servant, “Carry him to his mother.” 20 After the servant had lifted him up and carried him to his mother, the boy sat on her lap until noon, and then he died. 21 She went up and laid him on the bed of the man of God, then shut the door and went out.

22 She called her husband and said, “Please send me one of the servants and a donkey so I can go to the man of God quickly and return.”

24 She saddled the donkey and said to her servant, “Lead on; don’t slow down for me unless I tell you.” 25 So she set out and came to the man of God at Mount Carmel.

“Everything is all right,” she said.

27 When she reached the man of God at the mountain, she took hold of his feet. Gehazi came over to push her away, but the man of God said, “Leave her alone! She is in bitter distress, but the Lord has hidden it from me and has not told me why.”

29 Elisha said to Gehazi, “Tuck your cloak into your belt, take my staff in your hand and run. Don’t greet anyone you meet, and if anyone greets you, do not answer. Lay my staff on the boy’s face.”

30 But the child’s mother said, “As surely as the Lord lives and as you live, I will not leave you.” So he got up and followed her.

31 Gehazi went on ahead and laid the staff on the boy’s face, but there was no sound or response. So Gehazi went back to meet Elisha and told him, “The boy has not awakened.”

32 When Elisha reached the house, there was the boy lying dead on his couch. 33 He went in, shut the door on the two of them and prayed to the Lord. 34 Then he got on the bed and lay on the boy, mouth to mouth, eyes to eyes, hands to hands. As he stretched himself out on him, the boy’s body grew warm. 35 Elisha turned away and walked back and forth in the room and then got on the bed and stretched out on him once more. The boy sneezed seven times and opened his eyes.

36 Elisha summoned Gehazi and said, “Call the Shunammite.” And he did. When she came, he said, “Take your son.” 37 She came in, fell at his feet and bowed to the ground. Then she took her son and went out.

13 “Go, find out where he is,” the king ordered, “so I can send men and capture him.” The report came back: “He is in Dothan.” 14 Then he sent horses and chariots and a strong force there. They went by night and surrounded the city.

15 When the servant of the man of God got up and went out early the next morning, an army with horses and chariots had surrounded the city. “Oh no, my lord! What shall we do?” the servant asked.

17 And Elisha prayed, “Open his eyes, Lord, so that he may see.” Then the Lord opened the servant’s eyes, and he looked and saw the hills full of horses and chariots of fire all around Elisha.

18 As the enemy came down toward him, Elisha prayed to the Lord, “Strike this army with blindness.” So he struck them with blindness, as Elisha had asked.

19 Elisha told them, “This is not the road and this is not the city. Follow me, and I will lead you to the man you are looking for.” And he led them to Samaria.

20 After they entered the city, Elisha said, “Lord, open the eyes of these men so they can see.” Then the Lord opened their eyes and they looked, and there they were, inside Samaria.

22 “Do not kill them,” he answered. “Would you kill those you have captured with your own sword or bow? Set food and water before them so that they may eat and drink and then go back to their master.” 23 So he prepared a great feast for them, and after they had finished eating and drinking, he sent them away, and they returned to their master. So the bands from Aram stopped raiding Israel’s territory.

7 Elisha went to Damascus, and Ben-Hadad king of Aram was ill. When the king was told, “The man of God has come all the way up here,” 8 he said to Hazael, “Take a gift with you and go to meet the man of God. Consult the Lord through him; ask him, ‘Will I recover from this illness?’”

9 Hazael went to meet Elisha, taking with him as a gift forty camel-loads of all the finest wares of Damascus. He went in and stood before him, and said, “Your son Ben-Hadad king of Aram has sent me to ask, ‘Will I recover from this illness?’”

10 Elisha answered, “Go and say to him, ‘You will certainly recover.’ Nevertheless,[a] the Lord has revealed to me that he will in fact die.” 11 He stared at him with a fixed gaze until Hazael was embarrassed. Then the man of God began to weep.

“Because I know the harm you will do to the Israelites,” he answered. “You will set fire to their fortified places, kill their young men with the sword, dash their little children to the ground, and rip open their pregnant women.”

13 Hazael said, “How could your servant, a mere dog, accomplish such a feat?”

“The Lord has shown me that you will become king of Aram,” answered Elisha.

14 Then Hazael left Elisha and returned to his master. When Ben-Hadad asked, “What did Elisha say to you?” Hazael replied, “He told me that you would certainly recover.” 15 But the next day he took a thick cloth, soaked it in water and spread it over the king’s face, so that he died. Then Hazael succeeded him as king.