The “Philistines” to the North 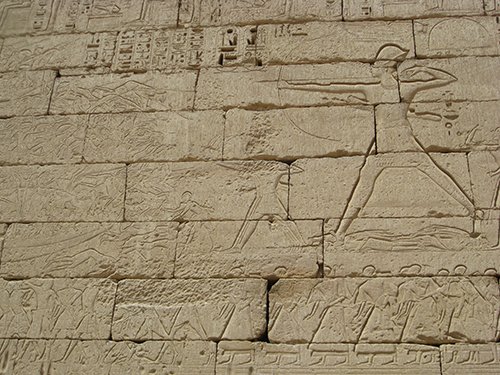 Reliefs at the Temple of Ramesses III at Medinet Habu depict the Egyptians in battle with three tribes of Sea Peoples: the Danunu, the Sikils and the Philistines.

The Philistines in the Bible and the northern Sea Peoples

To accuse someone of being a philistine today implies that that person is crass, unintellectual and lacking in culture. Where did this term come from? Who were the Philistines? In the Bible, the Philistines were the enemies of the Israelites. The Biblical conflict is well-attested, from Samson’s slaying of a thousand Philistines (Judges 15) to David’s battle with the Philistine giant Goliath (1 Samuel 17) to King Saul’s impalement on the walls of Beth Shean at the hands of the Philistines (1 Samuel 31). Through archaeology, however, we have learned that the Philistines were just one tribe of Sea Peoples who invaded Canaan in the 12th century B.C.E. and settled along the coast. The Bible refers to all of these tribes collectively as the Philistines.

The Philistines established the famous Pentapolis—Gaza, Ashkelon, Ashdod, Gath and Ekron—in the southern coastal plain. Archaeological excavations at each of these sites, save for Gaza (due to the modern buildings constructed atop its tell), reveal a rich material culture with origins in the Aegean. The Philistines were far from lacking in culture as the modern derogatory term suggests.

Capitalizing on the power vacuum left by the Egyptians and Hittites, the Sea Peoples launched a series of attacks in the Levant in the second half of the 13th century B.C.E. Pioneering archaeologist Trude Dothan describes this struggle in “What We Know About the Philistines”:

In wave after wave of land and sea assaults [the Sea Peoples] attacked Syria, Palestine, and even Egypt itself. In the last and mightiest wave, the Sea Peoples, including the Philistines, stormed south from Canaan in a land and sea assault on the Egyptian Delta. According to Egyptian sources, including the hieroglyphic account at Medinet Habu, Ramesses III (c. 1198–1166 B.C.) soundly defeated them in the eighth year of his reign. He then permitted them to settle on the southern coastal plain of Palestine. There they developed into an independent political power and a threat both to the disunited Canaanite city-states and to the newly settled Israelites.

We know about the different tribes of Sea Peoples not from the Bible but from Egyptian sources—and from archaeology. The famous sculpted reliefs at the Temple of Ramesses III at Medinet Habu depict the Egyptians in battle with three tribes of Sea Peoples: the Danunu, the Sikils and the Philistines (pictured above). In addition, the 11th-century B.C.E. Story of Wenamun papyrus describes an Egyptian priest’s journey to the Canaan/Phoenician coast to purchase Lebanese cedar trees and includes a reference to the Sikil settlement at Dor.

Archaeological investigations north of the Philistine Pentapolis have uncovered five significant sites inhabited by the northern Sea Peoples—Aphek, Tell Qasile, Tell Gerisa, Jaffa and Dor—of which Dor is the largest.

Excavations at the northern Sea Peoples’ site of Dor, which author Ephraim Stern directed for two decades, reveal that the Sikil city boasted a particularly strong defense wall and engaged in metallurgical activities. Cult objects discovered at Dor reflect Aegean and Cypriot origins and are also attested in the Philistine material record.