The “High Place” at Tel Gezer 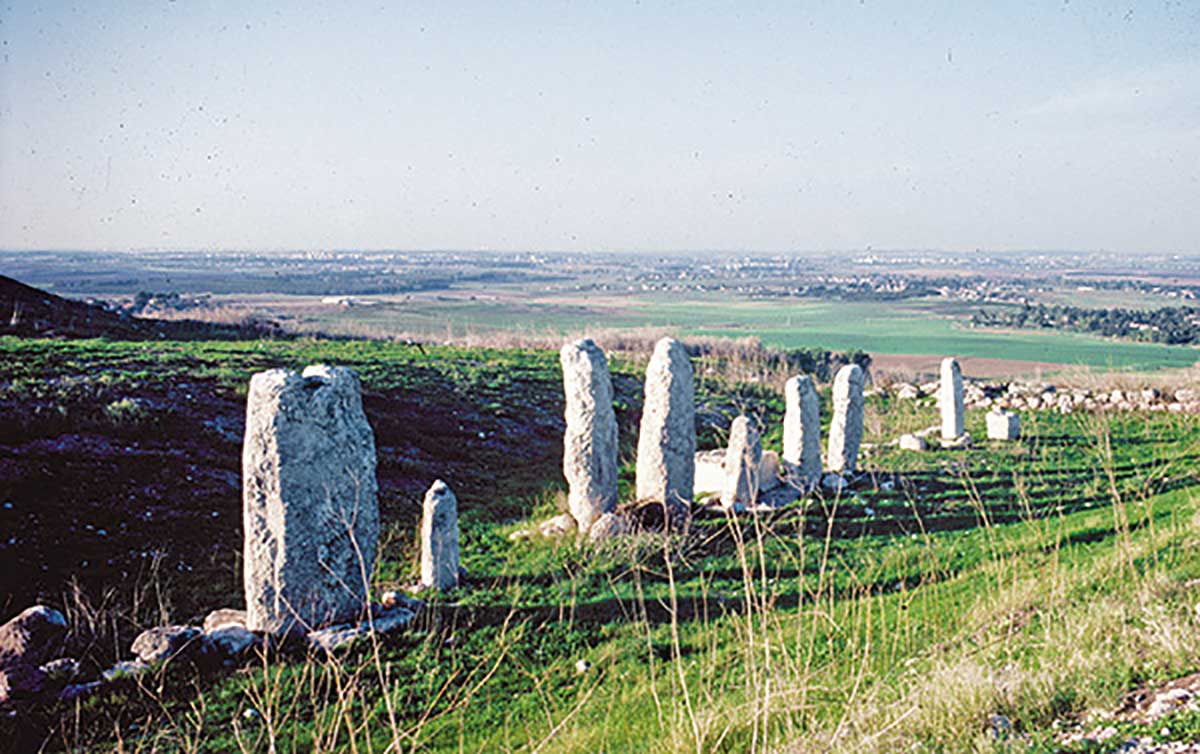 Tel Gezer’s first excavator, R.A.S. Macalister, believed these ten monumental standing stones were part of a Middle Bronze Age Canaanite “high place” dedicated to child sacrifice. This photo was taken during the re-excavation of Gezer in the 1960s and ’70s. Photo: Dennis Cole.

Located at the border of the Judean foothills and the Shephelah and strategically positioned near the crossroads of the Via Maris (the international coastal highway) as well as the road leading to Jerusalem, Gezer was a major Canaanite center in the Middle Bronze Age (first half of the second millennium B.C.E.). Archaeologists working at the 33-acre mound of Tel Gezer identified 26 strata spanning the Late Chalcolithic to the Roman periods. In the Bible, Gezer was sacked by an Egyptian pharaoh and given to King Solomon as a dowry for the pharaoh’s daughter (1 Kings 9:16).

Robert Alexander Stewart Macalister first excavated Tel Gezer from 1902–1909 in one of the earliest large-scale scientific archaeological projects. During this period, Macalister identified what he believed to be a Middle Bronze Age Canaanite “high place” dedicated to child sacrifice. Due to Macalister’s primitive excavation techniques and insufficient record-keeping, G. Ernest Wright, William G. Dever and Joe D. Seger conducted another excavation at Tel Gezer in 1964–1974. Macalister’s “high place” was located and re-excavated in 1968. William G. Dever has recently published the final report of the Tel Gezer “high place” excavations.1 In “Commemorating a Covenant” in the January/February 2015 issue of Biblical Archaeology Review, BAR’s editor emeritus examines Dever’s new report and reinterpretation of the Gezer “high place.”

Macalister’s “high place” comprised 10 monumental standing stones—some over 10 feet tall—oriented in north-south alignment and positioned next to a massive rectangular limestone basin. Below the plastered surfaces that surround the standing stones, Macalister discovered several jar burials containing the bones of infants who, in his estimation, were less than a week old when they died. Some of the bodies, he reported, had been burned. For Macalister, this site had to have been a bamah (an open-air altar shrine sometimes located at an elevated height), which some Biblical authors associated with child sacrifice (e.g., Jeremiah 32:35; 2 Chronicles 28:1–4; Ezekiel 20:26–29). According to Dever, however, Macalister’s identification—which continues to generate controversy today—was fraught with flawed analyses of the archaeological evidence: “There is little reason … to probe further through Macalister’s tortuous discussion of his excavation of the ‘High Place.’ It is impossible to glean any significant information from this mixture of fact (?) and fancy.”