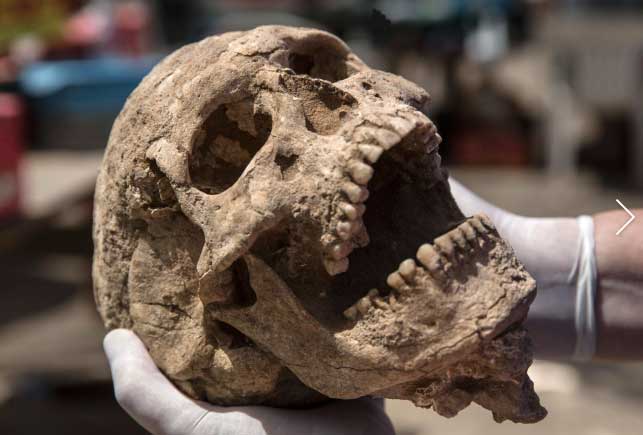 Skull from a Philistine burial from Ashkelon’s cemetery dated to the 10th–9th century B.C.E

Discovery brings us face to face with the Israelites’ archenemy

The first extensive Philistine cemetery ever discovered was found outside the walls of ancient Ashkelon. As one of the major Philistine city-states during the Iron Age, Ashkelon was a significant Mediterranean port and boasted a thriving marketplace. Excavations at Ashkelon have revealed many details about how the Philistines lived: the kind of houses they built; the food they ate; the plates, bowls, cups, pots and jars they made; the tools and weapons they used; the jewelry they wore; the imports they bought; the way they made clothes; and much more.

Now Ashkelon has yielded the Philistines themselves.

More than 210 individuals have been excavated from Ashkelon’s cemetery. Their burials have varied from simple pit interments and cremations in jars to interments in ashlar-built tombs—with the most frequent being pit interments. Grave goods dated from the 11th–8th centuries B.C.E. accompanied some of the Philistine burials. The most common items included in Philistine burials are small juglets. Storage jars, bowls and juglets have been found next to many individuals; these installations consist of a storage jar standing upright with a bowl sitting on its top opening and a juglet resting inside the bowl.

In addition to the many ceramic vessels from Ashkelon’s cemetery, jewelry, amulets and weapons have also been discovered. Individuals were found wearing delicate silver earrings, as well as bronze necklaces, bracelets, earrings and rings. A few bracelets with alternating bronze and carnelian beads and necklaces with alternating carnelian beads and cowrie shells were found; although the strings that originally connected these beads had long deteriorated, the beads themselves stayed in their original positions.